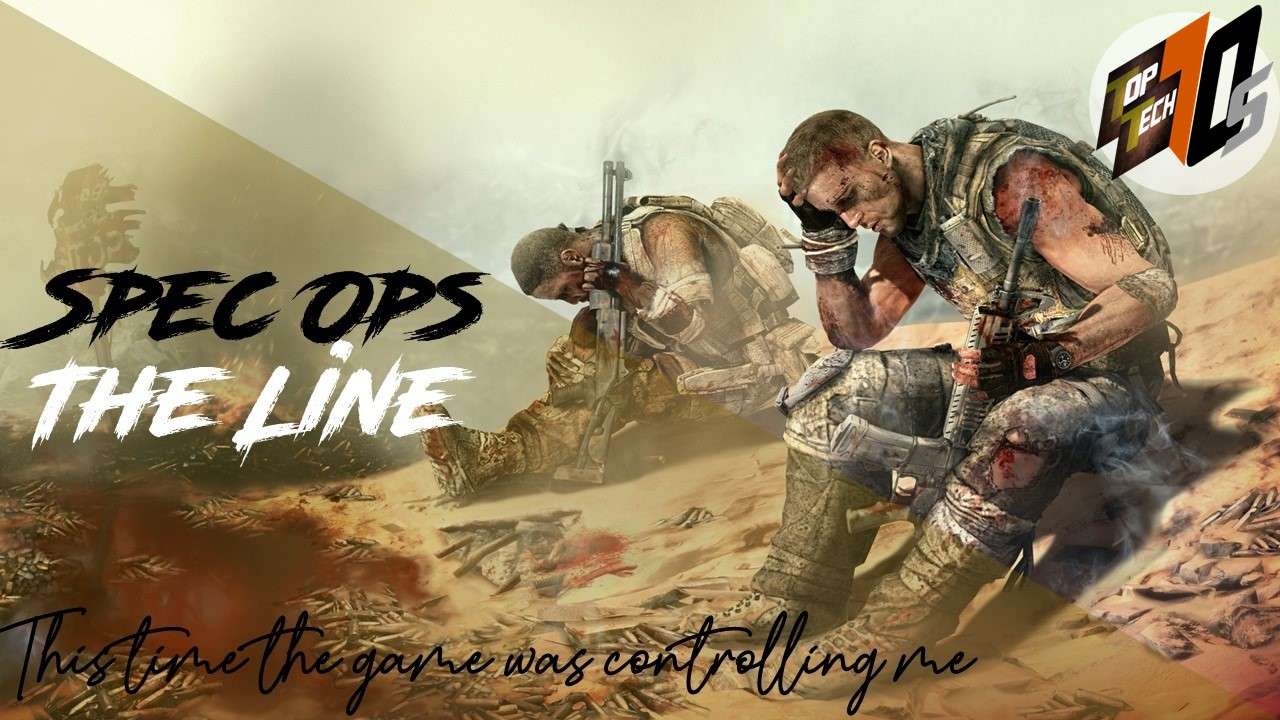 Story and campaign are the most important factors that I consider before playing a game. So, when I started playing Spec Ops: The Line, I had a rough idea of the game’s story being different from generic third-person shooters. And I must admit, Spec Ops: The Line didn’t disappoint me.

Now, if you haven’t played this game, there’s no point in reading this article as there are a lot of spoilers. And I want you to play this game because the dark narrative of Spec Ops: The Line is something that every gamer should experience.

Before writing this article, I read many interpretations and theories related to this game. And the more I read, the more I started appreciating the game’s character development and storytelling. But before we get to the story, I want to begin with something easy, the gameplay. 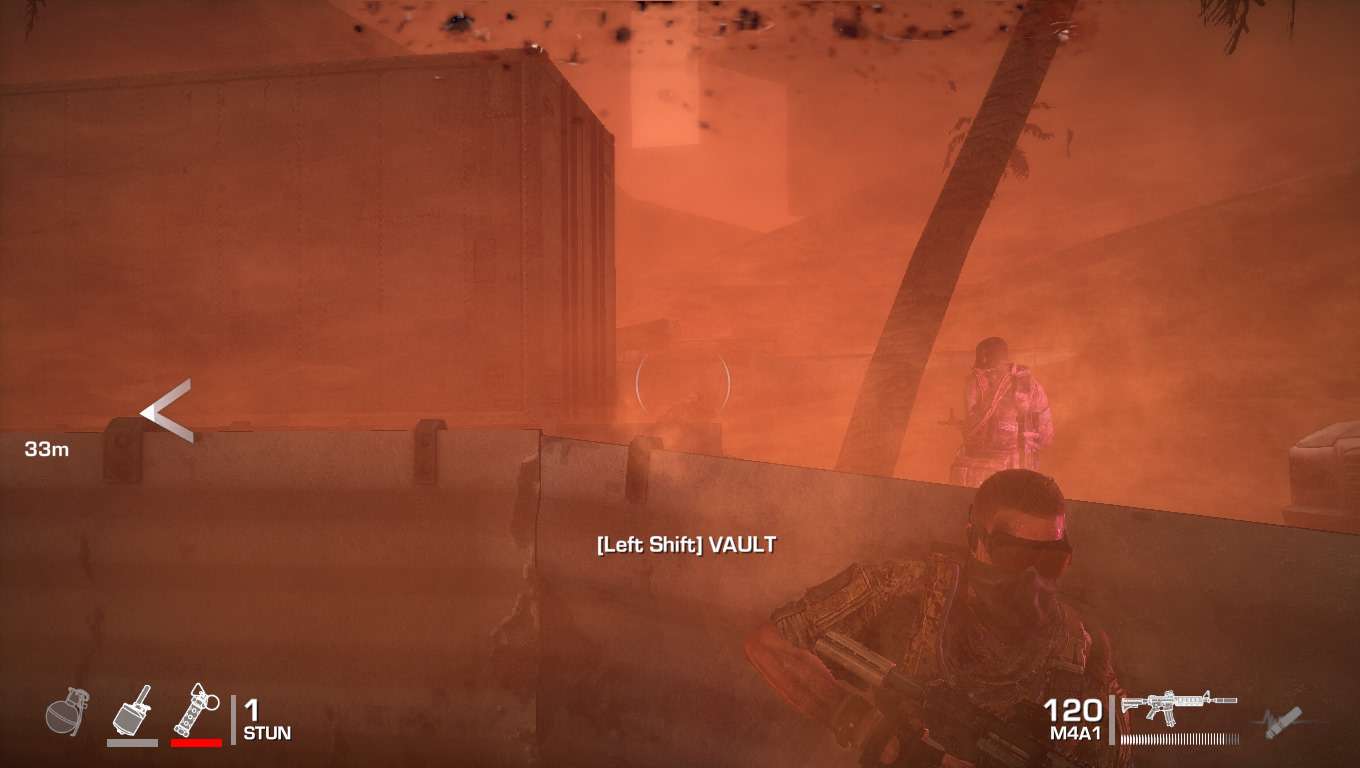 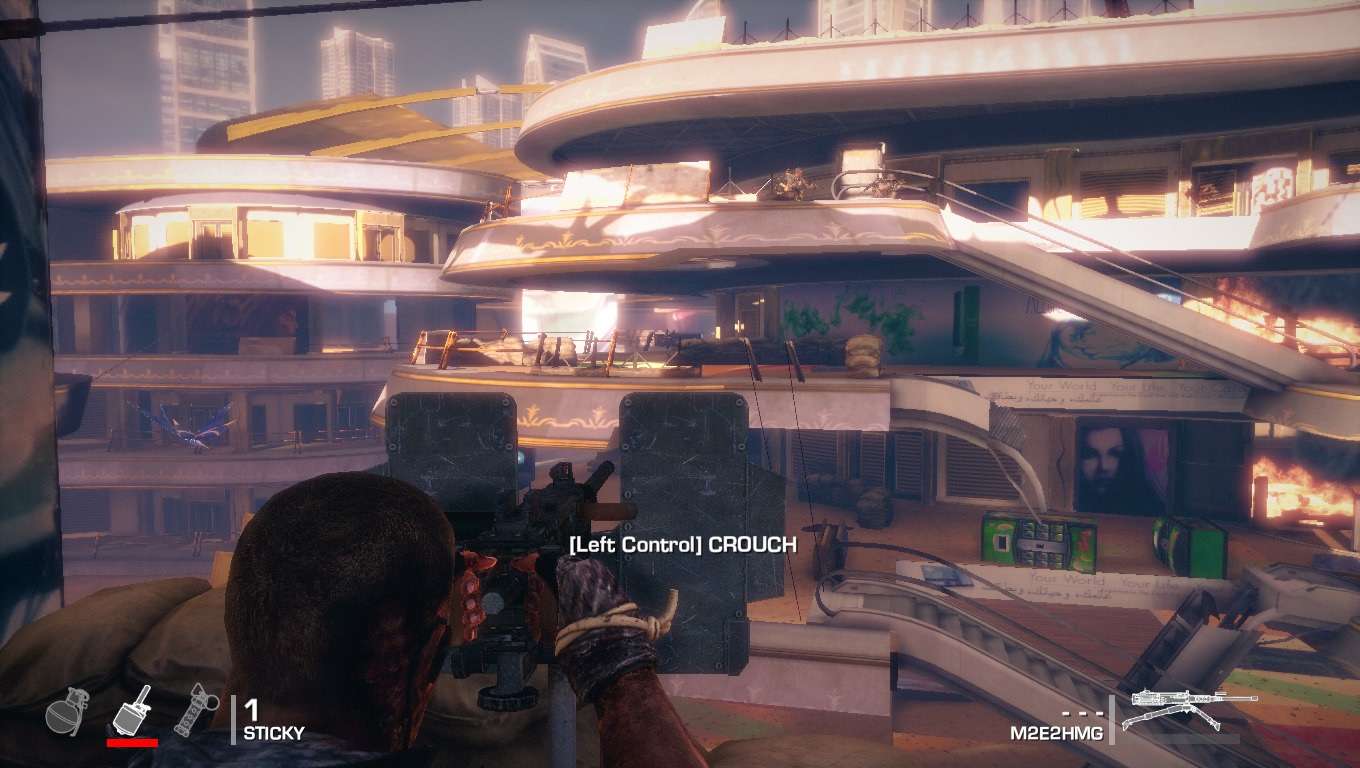 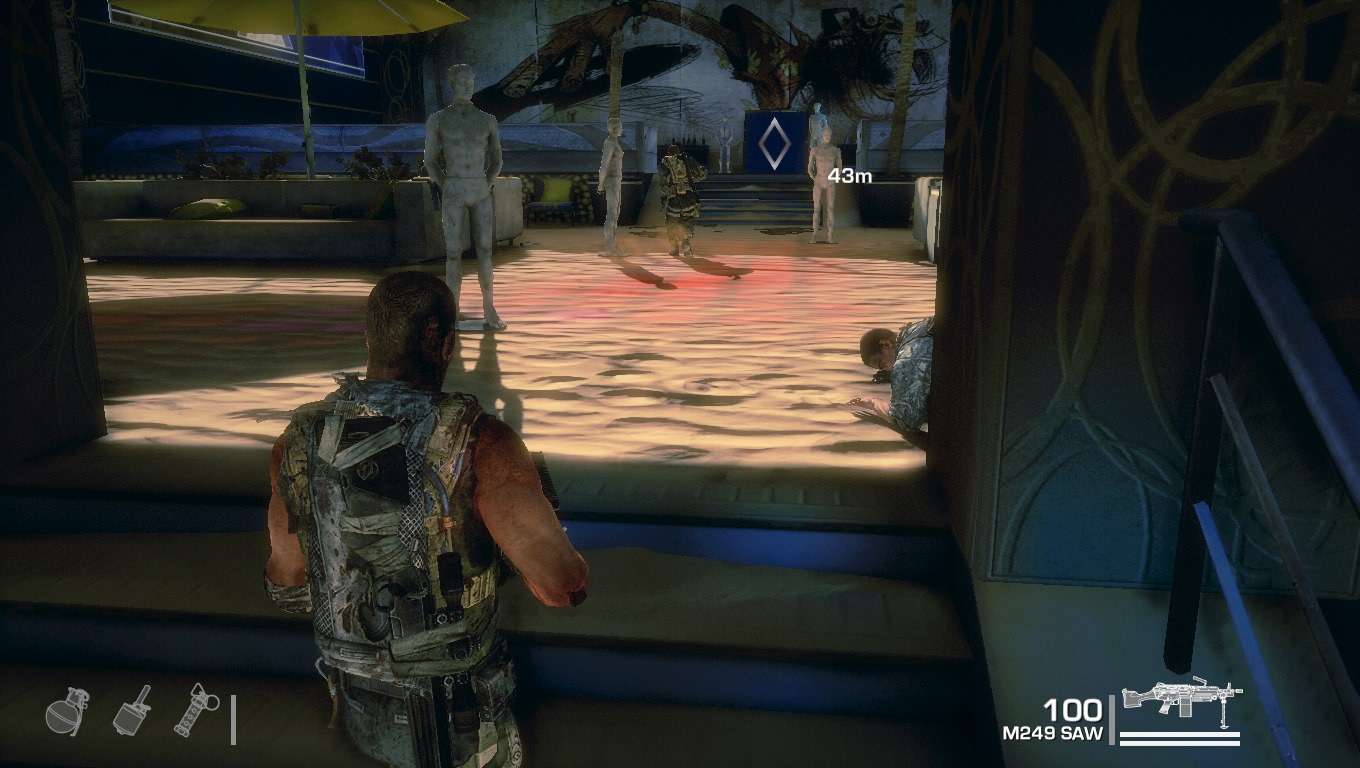 Spec Ops: The Line’s gameplay is nothing new. It plays like any other third-person shooter. You can take cover, blind fire, carry two weapons at a time, occasionally use mounted machine guns, and all other usual gameplay elements. And it might not be the best third-person shooter that I have played, but to be honest, I had many fun moments while completing the campaign.

When you score a direct headshot, the game slows down for a second, and it gives you an opening to clear nearby enemies, if possible, and due to this, I wanted to keep my shots as accurate possible. And if you try to complete this game on FUBAR difficulty, using this gameplay mechanic becomes necessary.

You don’t have too much ammo, so you can’t shoot whatever and wherever you like. Picking ammo and replacing guns with dead soldiers is something that you will find yourself doing again and again. Ammo crates can be found nearby at the beginning of almost every chapter and during the missions, but the number of bullets you get is rarely enough. There’s one more and final way of getting ammo and grenades, finishing off injured enemies.

Throughout(almost) the game, you are accompanied by two squadmates, and they know how to shoot. I am saying this because I have played games where AI teammates are there just for the sake of it, but that’s not the case with Spec Ops: The Line. You can order Adams and Lugo to throw stun grenades, take out enemies or heal each other if one of them goes down.

The game’s environment is full of sand, and in many cases, you can use it to your advantage. Shooting at windows or other weak spots on the map will bury your enemies under the sand. Most of the time, you will know when to do this as the game objectives will guide you.

And before writing this article, I played the game again, and I picked up a detail worth sharing. I threw a sticky bomb at a soldier, he panicked and ran towards his teammates and one of them bashed his head with a riffle to save their lives. I felt sad for a moment, and then I started doing it more often.

But the gameplay isn’t what I was looking for when I picked Spec Ops: The Line, it’s the story. So, the story analysis coming right up. 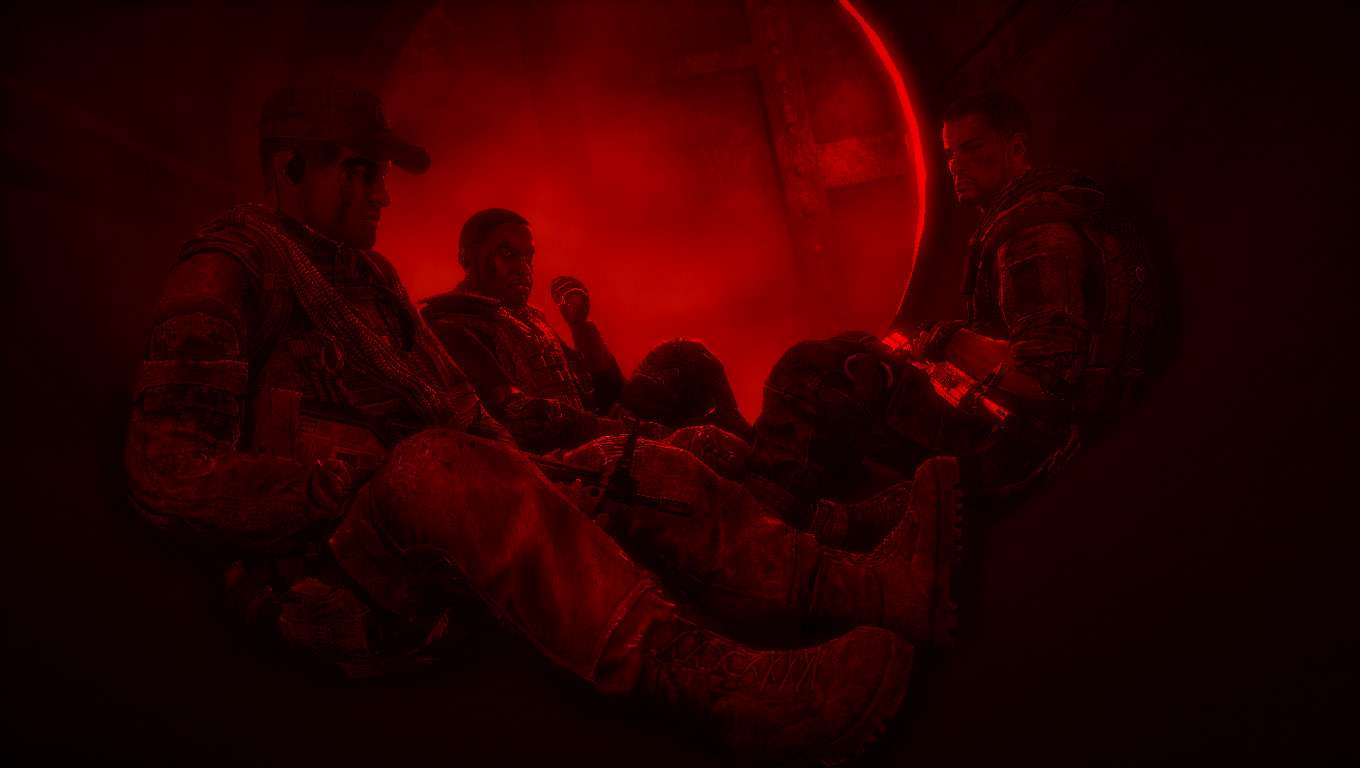 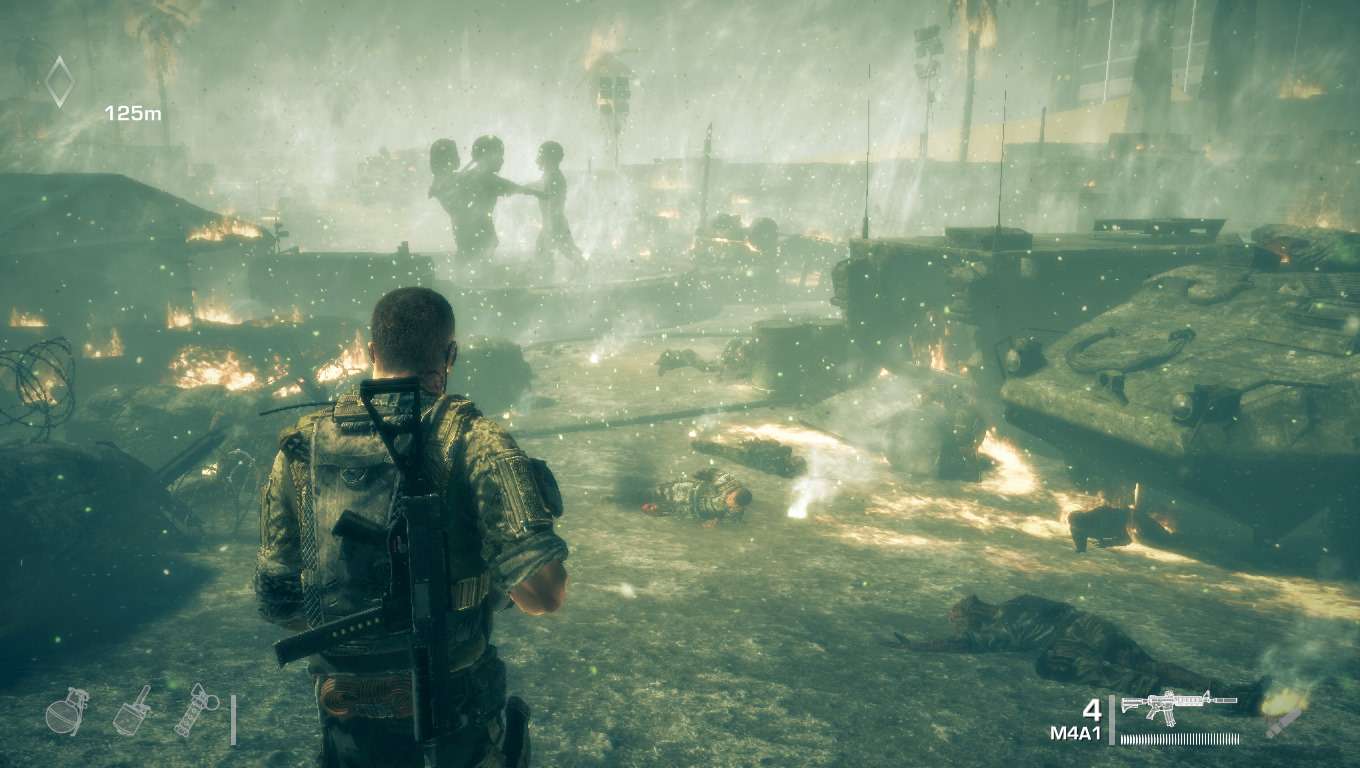 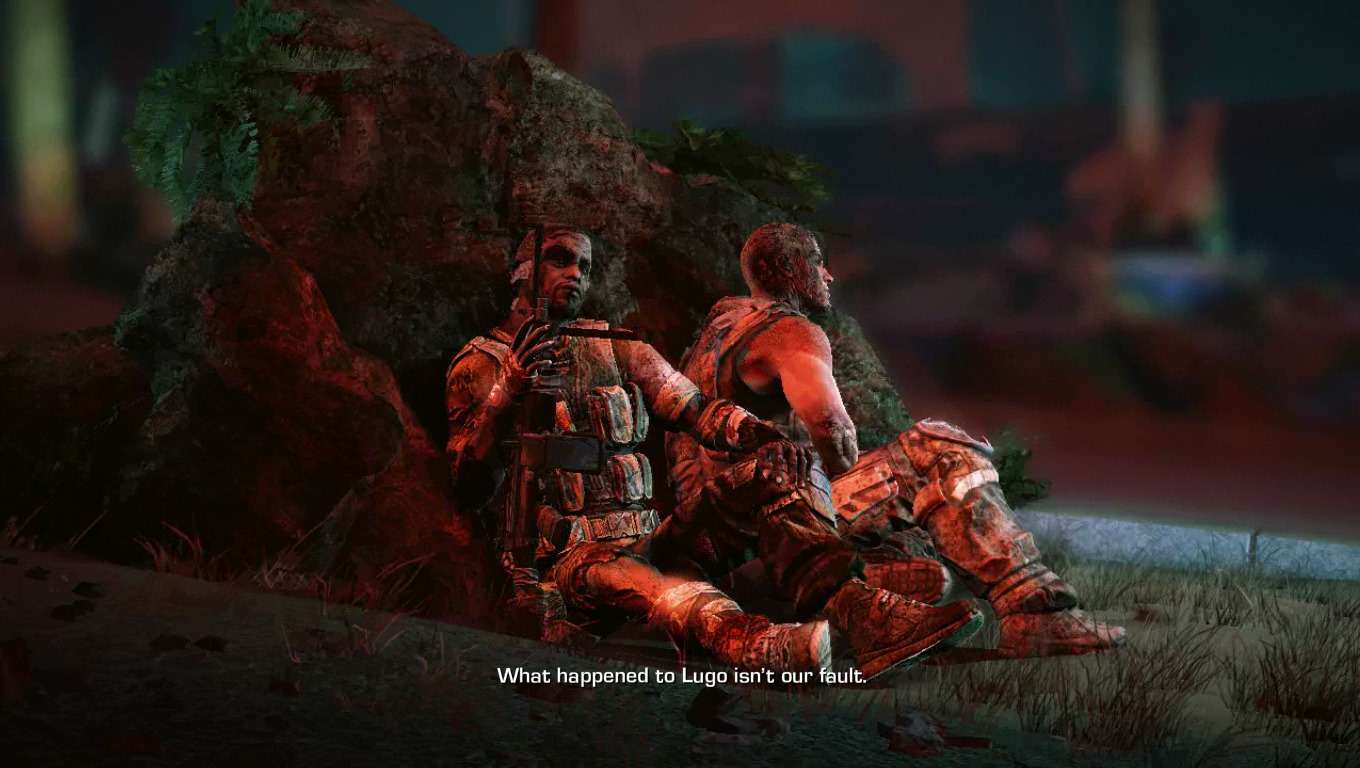 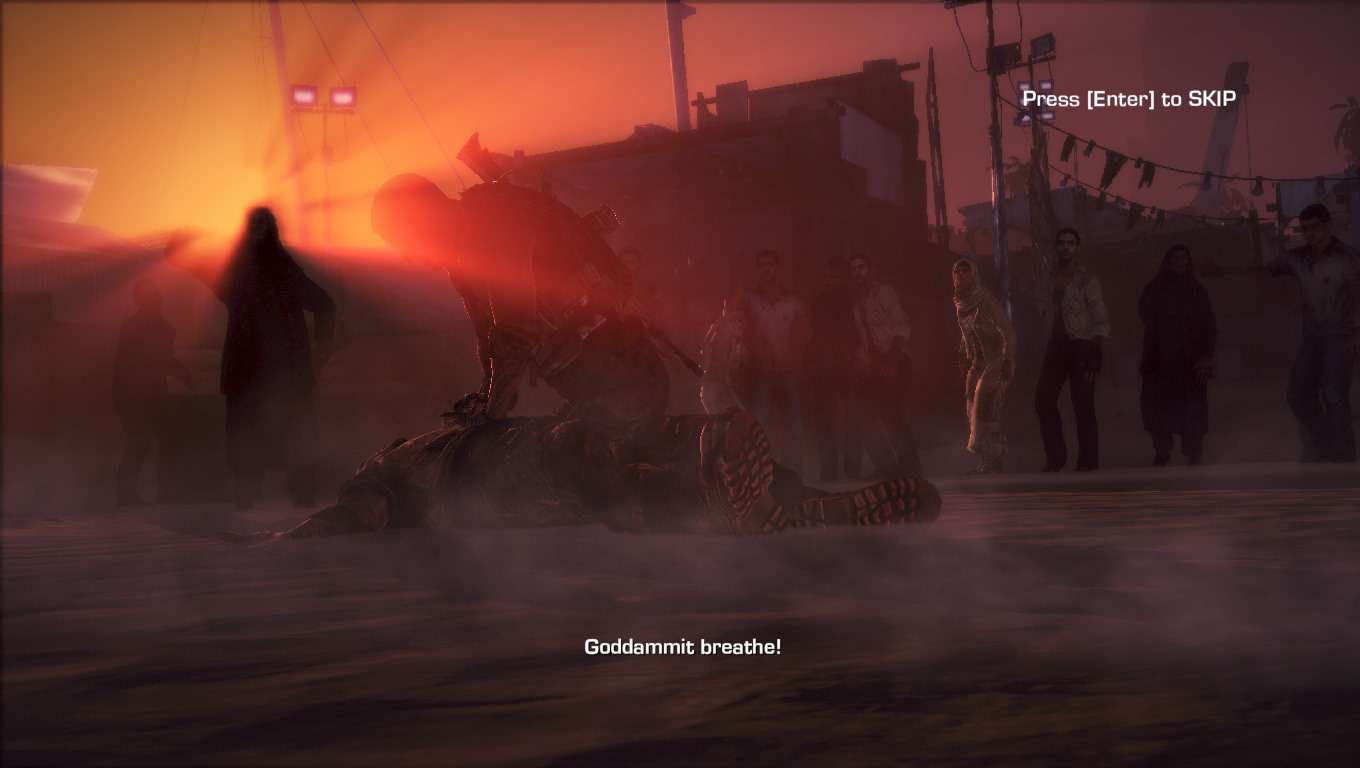 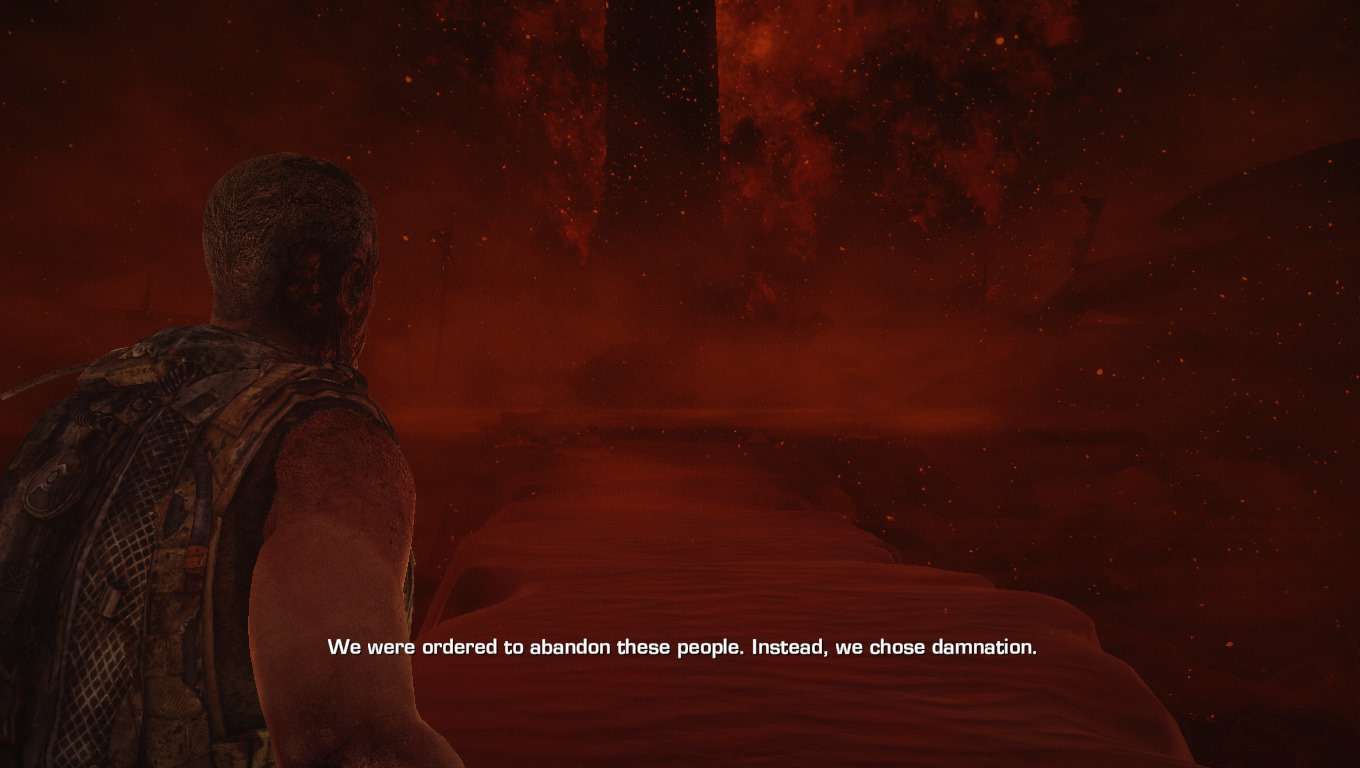 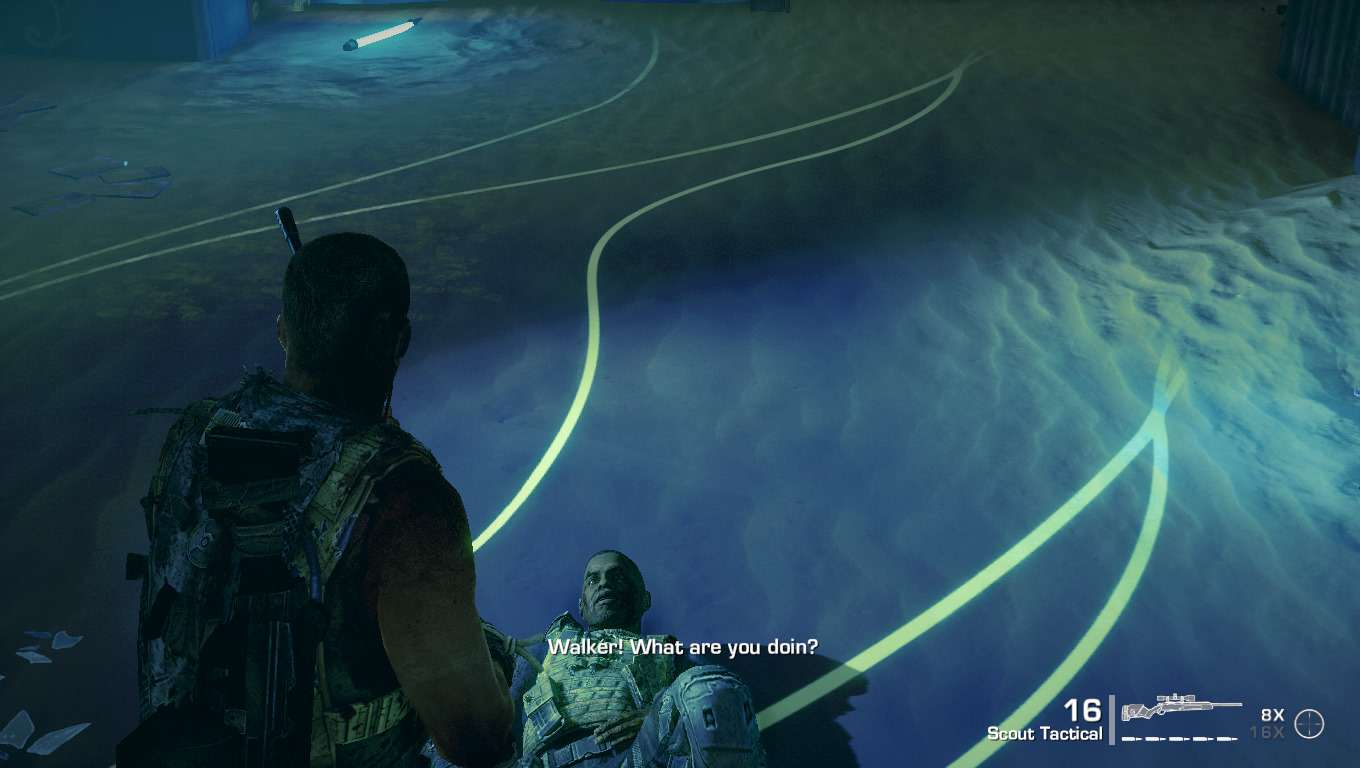 Now, I will try not to go into too many story details as I am sure that you aren’t reading this without playing the game. But if you want to read about the complete plot, in a nutshell, the fandom page of Spec Ops: The Line is what I recommend. You can read it here.

The developers have said that the game’s story is open for interpretations, and several explanations can be found online. But if you are looking for something legit, the game’s very own writer, Walt Williams, is your best bet. And his interview with ign regarding Spec Ops: The line explains a lot. So, his interpretation of the story is what I believe to be the most accurate.

The entire interview of Walt Williams is worth reading, but his explanation of the iconic helicopter sequence is essential if you want to understand the story. Here’s what he said,

“For me, everything after the crash is Walker kind of reliving the hell of what he had just done. You can even interpret Konrad as being not necessarily a delusion inside his mind, but some kind of external projection of his guilt in this purgatory or hell or afterlife, or however you choose to view it.”

This explanation isn’t required if you choose to ignore Walker’s hallucinations and all the weird things that happened after the helicopter crash. But ignoring Walker’s crazy illusions isn’t possible if you truly want to understand the story. Allow me to explain.

As Williams said, Walker died after the helicopter crash. So, from the point where you start playing the game to the next time you replay the helicopter sequence, it’s just Walker reliving his last few hours. And during the remaining chapters, Walker is in his personal hell as Konrad points out when Dubai erupts in flames. And if you notice, Walker’s hallucinations increase after the helicopter crash, and his situation gets worse. Lugo gets hanged by an angry mob. After the mortar fire, Walker sees everyone on fire, and within a few minutes, Lugo comes out firing at Walker and blaming him for his death. In short, Walker was in hell.

So, what about the deja vu that Walker had in the second helicopter sequence? This is where the story gets more complex, and from the theories that I have read, it seems that Walker is in a loop. He did not relive his memories once, but he is doing it again and again. And the only way to end Walker’s suffering is the ending that he deserves.

The Most Reasonable Ending 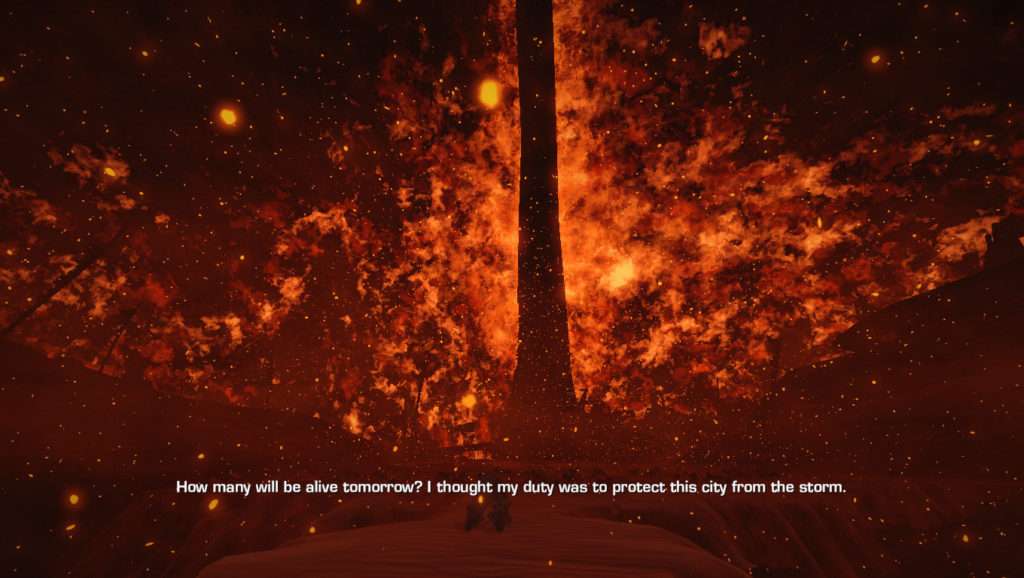 Before I talk about the ending, I want to make sure that you know about an important detail from the game. Whenever the game fades into black during a transition, everything’s normal, but during a white transition, Walker is manipulating with his memories. This also explains a lot about the first 12 chapters as the game begins with the screen fading into white.

The only ending which has no white transition is when you see Walker dead. And Walker’s death is the only reasonable ending to Spec Ops: The Line. Walker finally stops blaming Konrad, takes responsibility for his actions, and breaks the loop by killing himself. The ending where Walker calls for an evacuation fades into white, meaning Walker is again trying to run from the truth, and he will have to go through hell once again.

My Thoughts On The Story 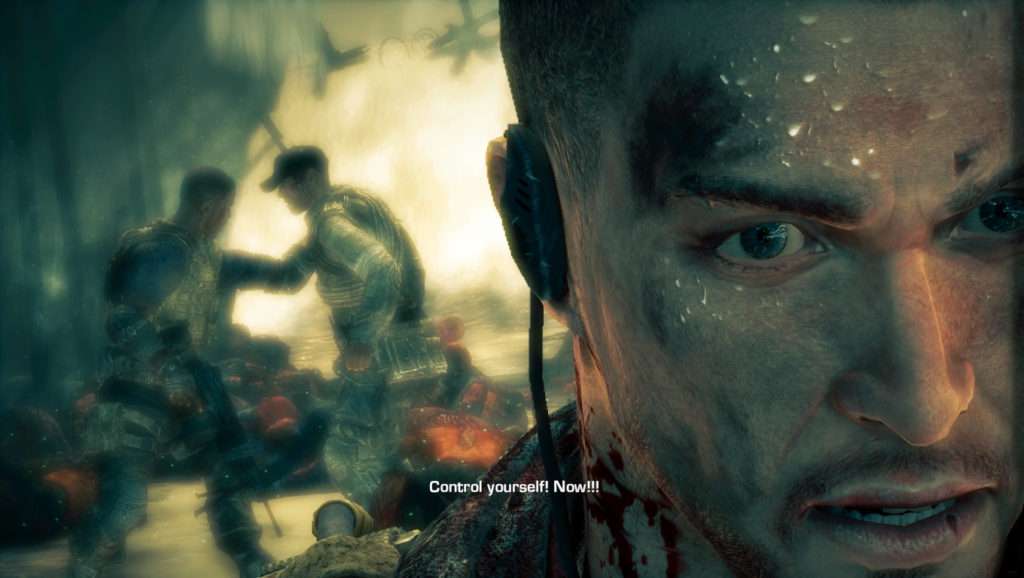 Walker tried to play a hero when all he had to do was follow the orders and call for an evacuation after coming in contact with the survivors. From time and time again, he was reminded by Lugo to stick with the orders, but Walker found shooting everything that moved a better plan. Killing armed survivors and US soldiers was justified by Walker as a lack of choice. He had a choice, but he failed to see it as he was too busy trying to be a hero. Had he called for an evac, things might have turned out differently.

Walker messed up completely when he refused to blame himself for the death of 47 innocent civilians. He wanted to be a savior, and he didn’t want to believe that his orders killed the people he came to save in Dubai. And to run away from the truth, he blamed Konrad, a dead man, and his 33rd battalion. And after this point, Walker’s mission was no longer to save people but his own self from his sins. But before he could confess or punish someone else for all that was happening, he died. And he had to relive his memories, again and again, confession being the only way out.

Spec Ops: The Line is a dark game, and no matter what you do, there’s no happy ending. Walker can’t have a happy ending after all that he did. And I guess this what the developers wanted to prove with this game. You can’t go on to live a normal life after killing someone. This is something that isn’t explored in most of the games. In the end, after shooting bullets after bullets, the protagonists end up victorious and have a completely normal mind. Doesn’t sound too realistic now. Does it?

Did Spec Ops: The Line Affect The Way I See And Play Video Games?

To be honest, not really. The dark storyline of Spec Ops: The Line is unforgettable, and it made me emotional at a lot of points. But I guess every gamer knows the line between reality and videogames. So, I don’t think I will be worried about killing an NPC, the next time I play a videogame. However, I will love to hear your views about this topic.