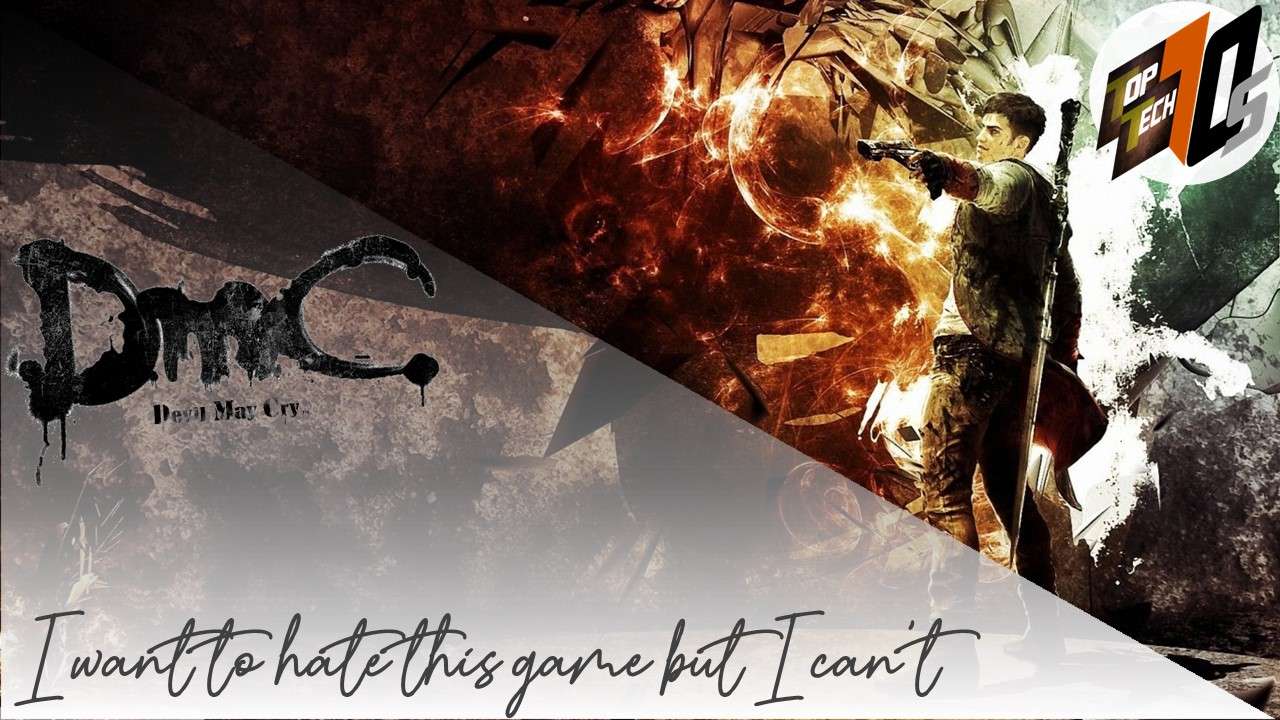 Devil May Cry is one of my favourite franchises and the last year’s epic comeback filled my dark soul with light. I am so glad that the Capcom decided to continue with the original characters and their stories. And it seems that nothing wrong is going to happen with this franchise any time soon. So, I think we can finally forgive the infamous reboot for butchering one of the most beloved game protagonists, Dante. And with this review, I will try to look at DmC without wearing my fanboy goggles.

To be honest, I never hated this game. If you ignore some lazy writing and poorly written characters, DmC is a solid game. Slick combat, impressive visuals and level designs, character movements and animations in this game never failed to impress me. Before writing this review, I played this game again, and I had a fun time completing the campaign once again. 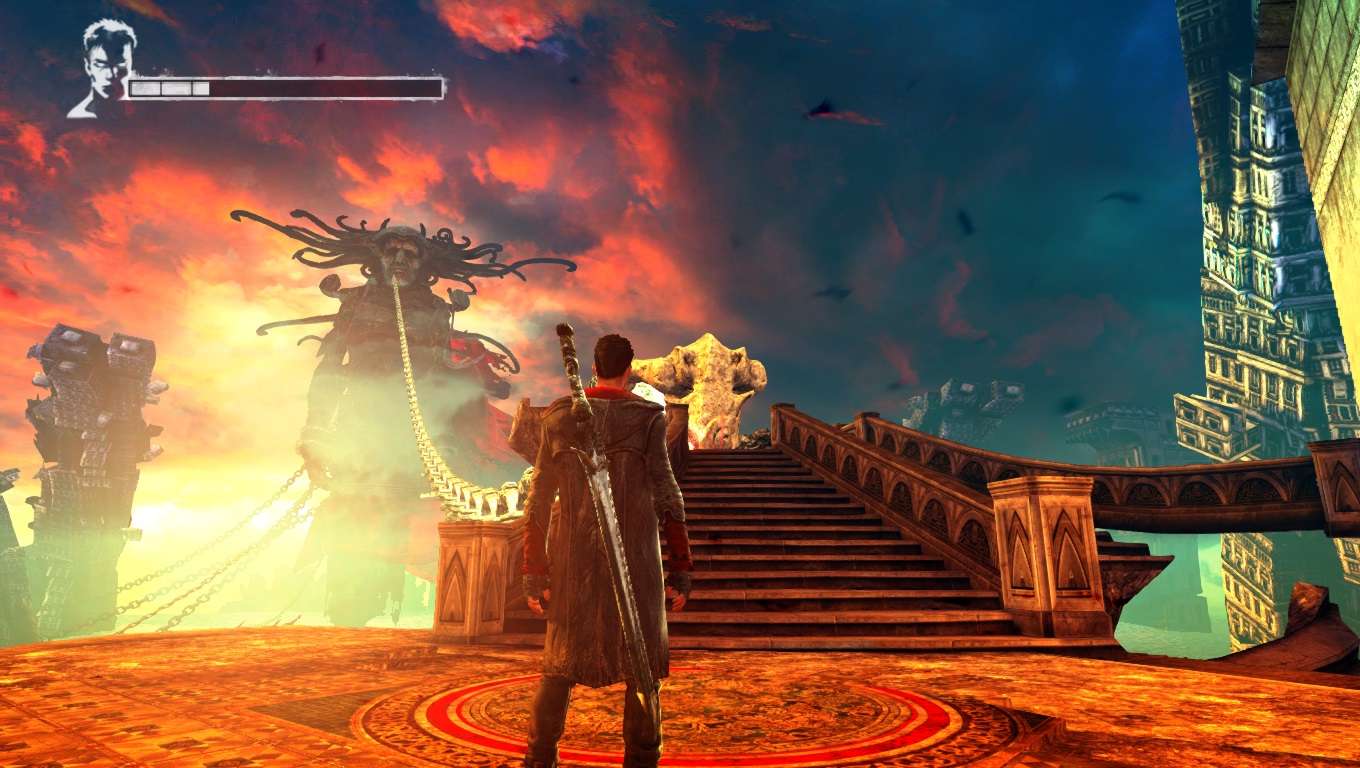 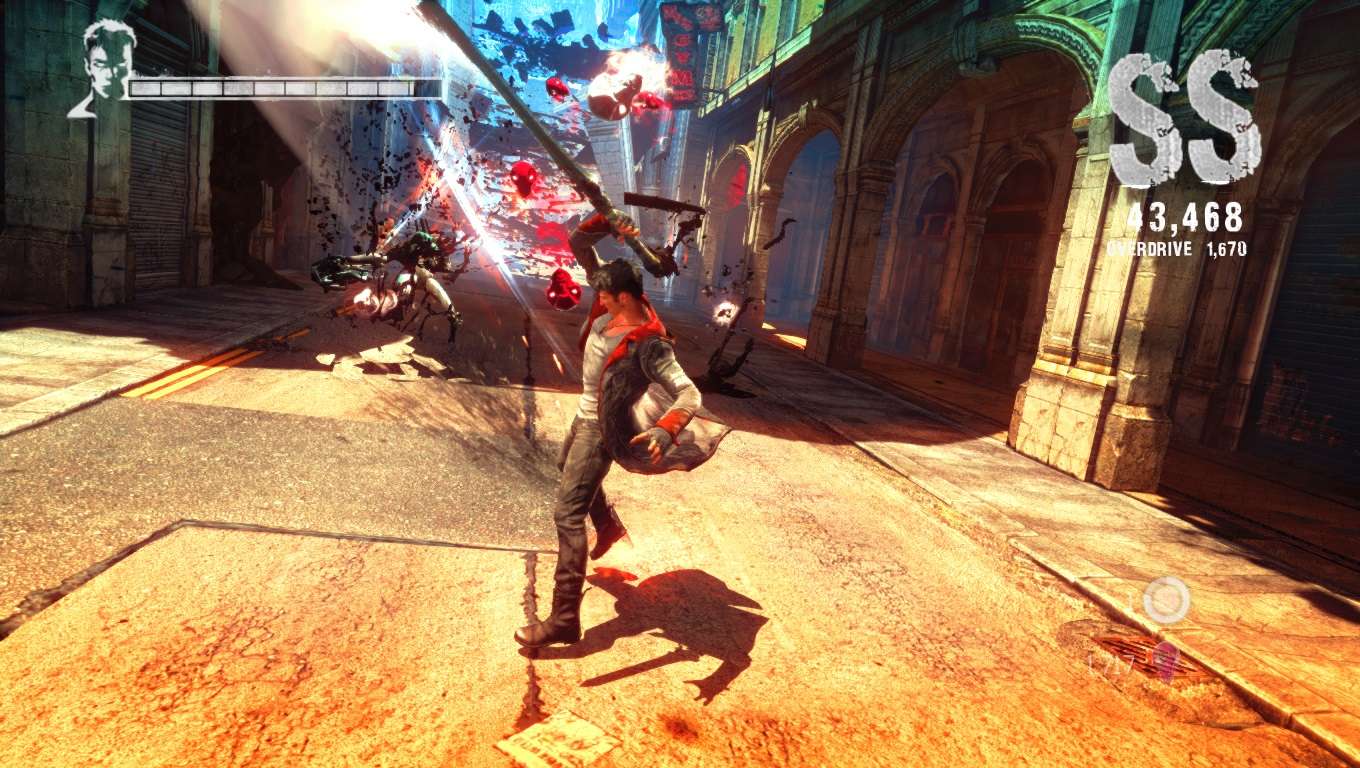 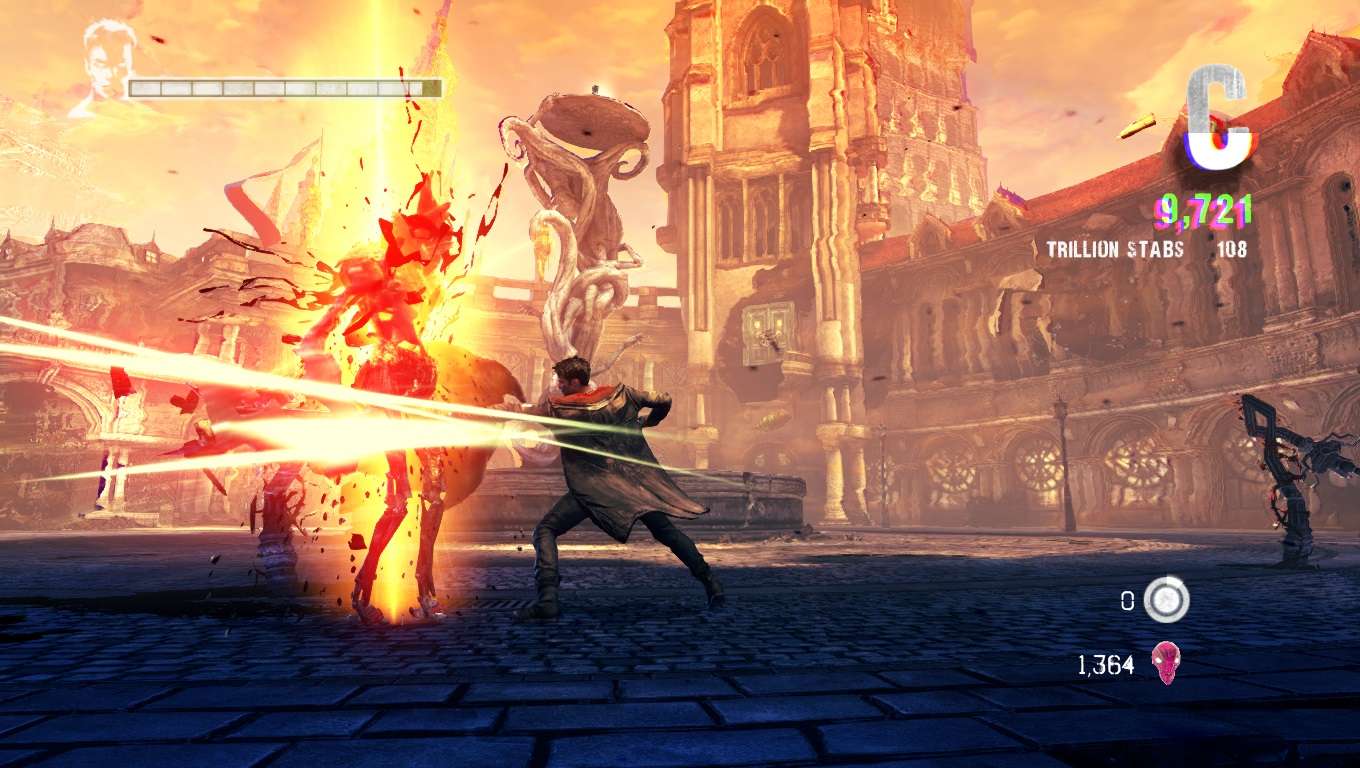 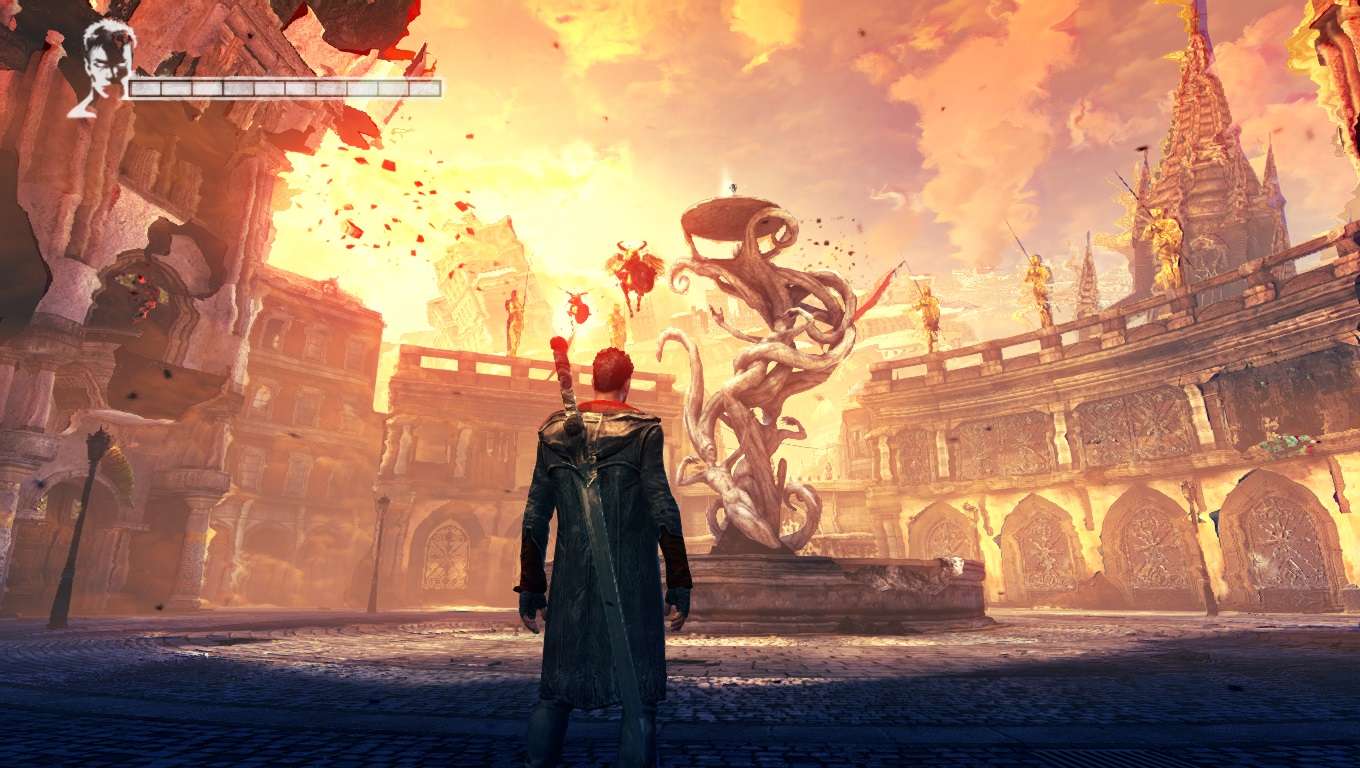 I have a confession to make. I was never a good player in the original Devil May Cry games. Reaching the triple SSS rank during combat always felt like a big achievement. I had to constantly perform different combos, or my style meter would start falling. But in DmC as long as you don’t receive any damage your style meter keeps rising. So, even if you are a noob or new to hack and slash games, you can get the SSS rank. And Dante can dodge in this game, so taking no damage for a while isn’t too hard.

The combat in DmC is smooth, and performing combos is quite easy if you try to practice and be creative. The five melee weapons that you get can be switched easily during the combat, and their animations feel natural. You have the iconic Rebellion, two angel weapons – Aquila and Osiris, and two demon weapons- Arbiter and Eryx. And the way you can seamlessly switch between these weapons is amazing. Rebellion is the default weapon, and by holding the specific triggers, you can use the angelic or demonic weapons.

Each weapon is useful, and using the right weapon and attacks can help you in getting an advantage over some enemies. Osiris’ Prop can be used to deflect most of the enemy projectiles, Eryx can launch even the heaviest enemies in air and Aquila can be used to hold the enemies in the air or at a distance. Moves involving a pause after two strikes are quite easy to perform as all weapons flash to indicate the right timing. You can switch the weapon as soon as you see it flash and finish the enemy with a deadly combo. I like hitting the enemies twice with Rebellion and ending the combo with Arbiter’s Trinity smash.

Sadly firearms aren’t as balanced as the melee weapons. Ebony and Ivory are good but always seemed extra and useless. You get a shotgun named Revenant when you are more than halfway through the game. It has the classic firework attack used for crowd control, and it felt more useful than Ebony and Ivory. Kablooey, a gun which throws explosive darts, is the most useless weapon in the game. When fully upgraded, it can fire 6 darts that explode when you want them to. Using Kabooley felt so slow that I found juggling enemies in the air with the Rebellion a way better option. 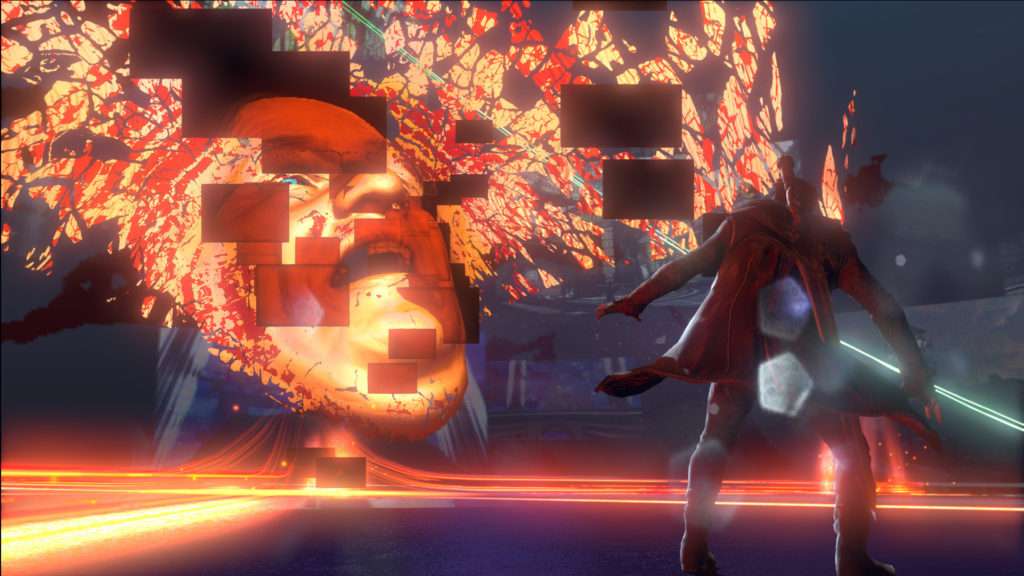 The boss fights disappointed me the most in DmC. I know that I promised to review this game without the fanboy goggles, but I just can’t help it. I am not talking about the boss designs here as they are fantastic and so creative. You fight the giant head of a news reporter in this game, I don’t think it can get any more impressive than that. But what really bothered me is the stiffness of these boss fights. You have little to no freedom in the way you fight these bosses. They have a specific and very obvious weakness that can be easily targeted. These boss fights are boring even if you don’t compare them to the original Devil May Cry games.

The Mundus boss fight was more like fighting Mundus’ fists. And it just felt so stupid after everything that I had to do to get that point. Being a fan of the franchise, I had an idea of Vergil’s intentions, and I was waiting to fight him. And the game disappointed me again. Vergil’s moves were predictable and criminally slow. I defeated him in my first attempt. I still remember my first encounter with Vergil in Devil May Cry 3. I died more than ten times trying to beat him. 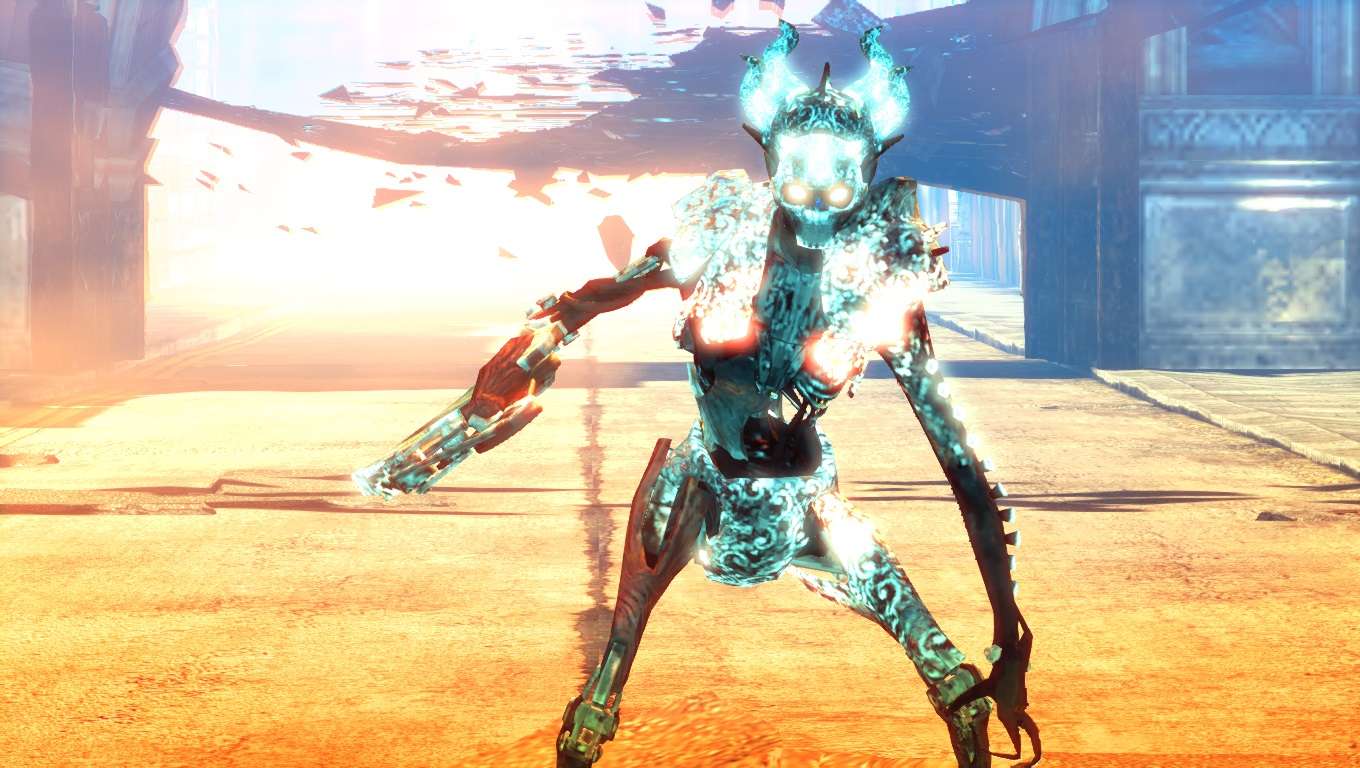 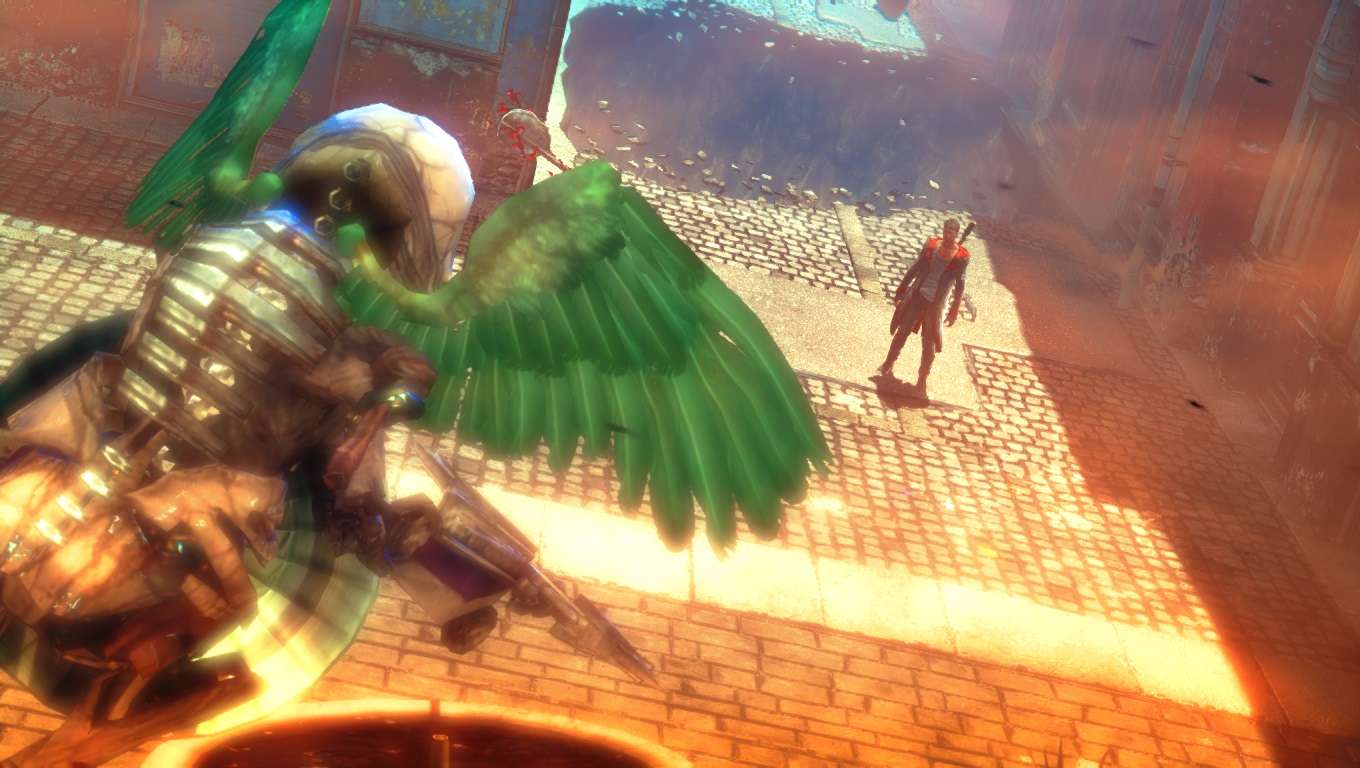 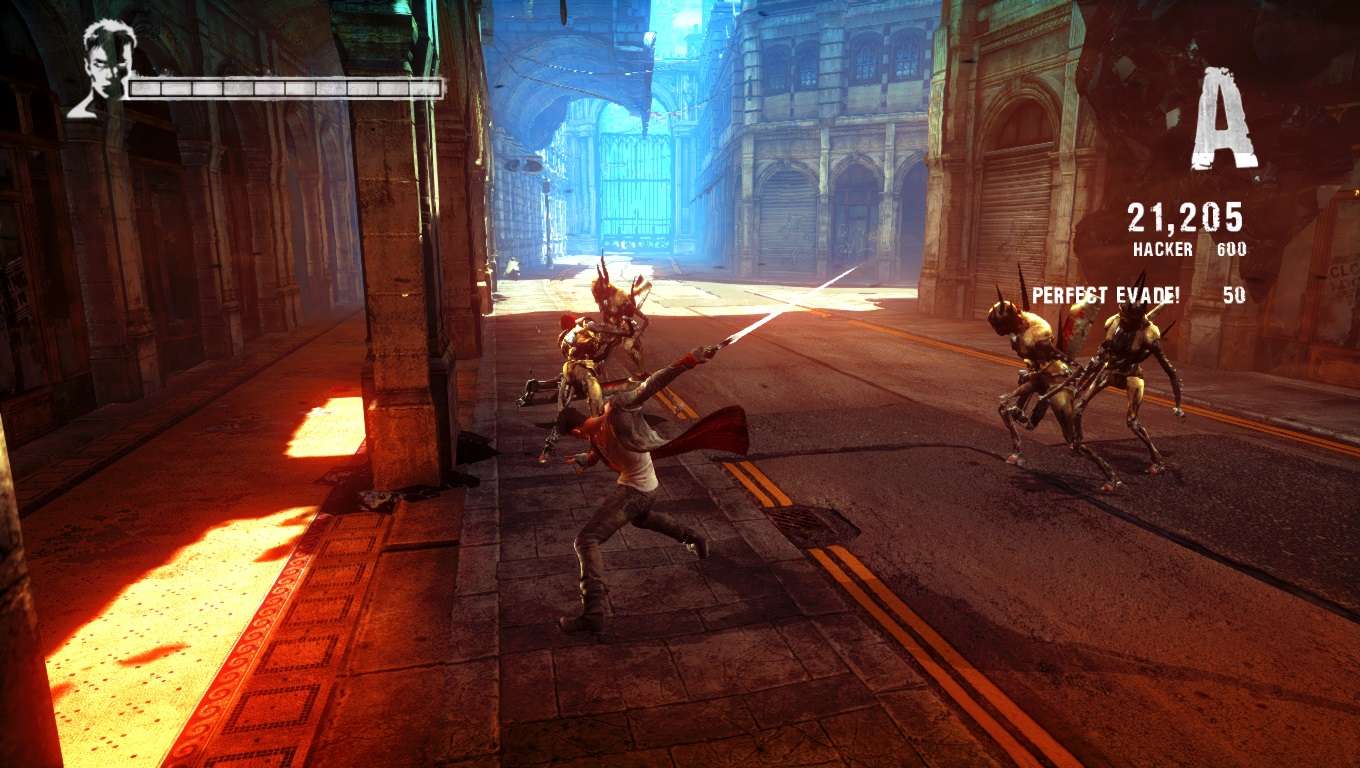 I loved enemy types in DmC. There are more than twenty types of demons, and each of them feels different from each other. And some of them are really tough and annoying. The Witch can form a protective covering around herself and other enemies and can attack you from a distance with some big looking swords. Rage Spawns, look like porcupines, come in a group, and one of them gets angry if you kill its partner. Dreamrunner, a demon with two swords, is more challenging to defeat than some of the bosses in the game. In short, the demon world has a lot of diversity.

But the colour coded enemies are undoubtedly a problem. Red enemies take damage only from a demon weapon and to fight blue coloured enemies you have to use an angel weapon. It provides some difficulty to the combat, but it isn’t worth it as it takes away freedom from the gameplay. 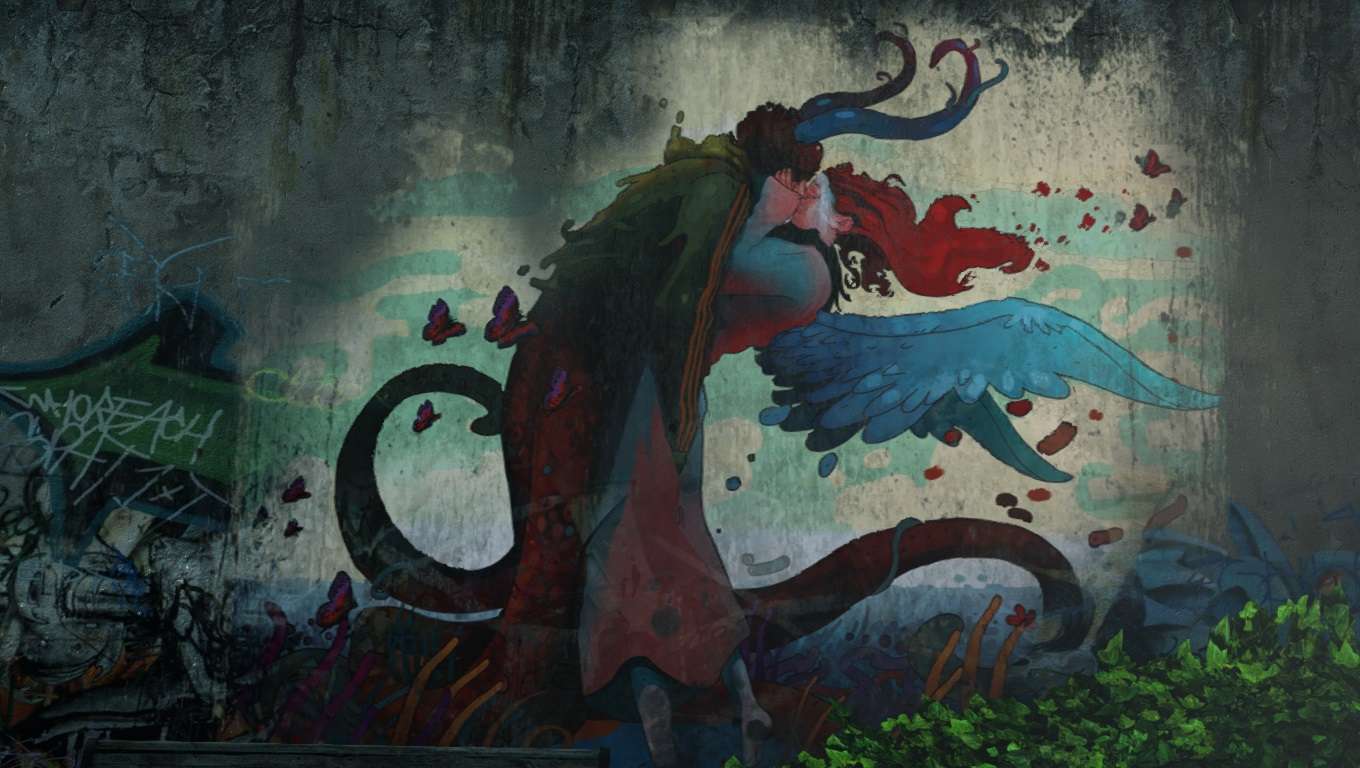 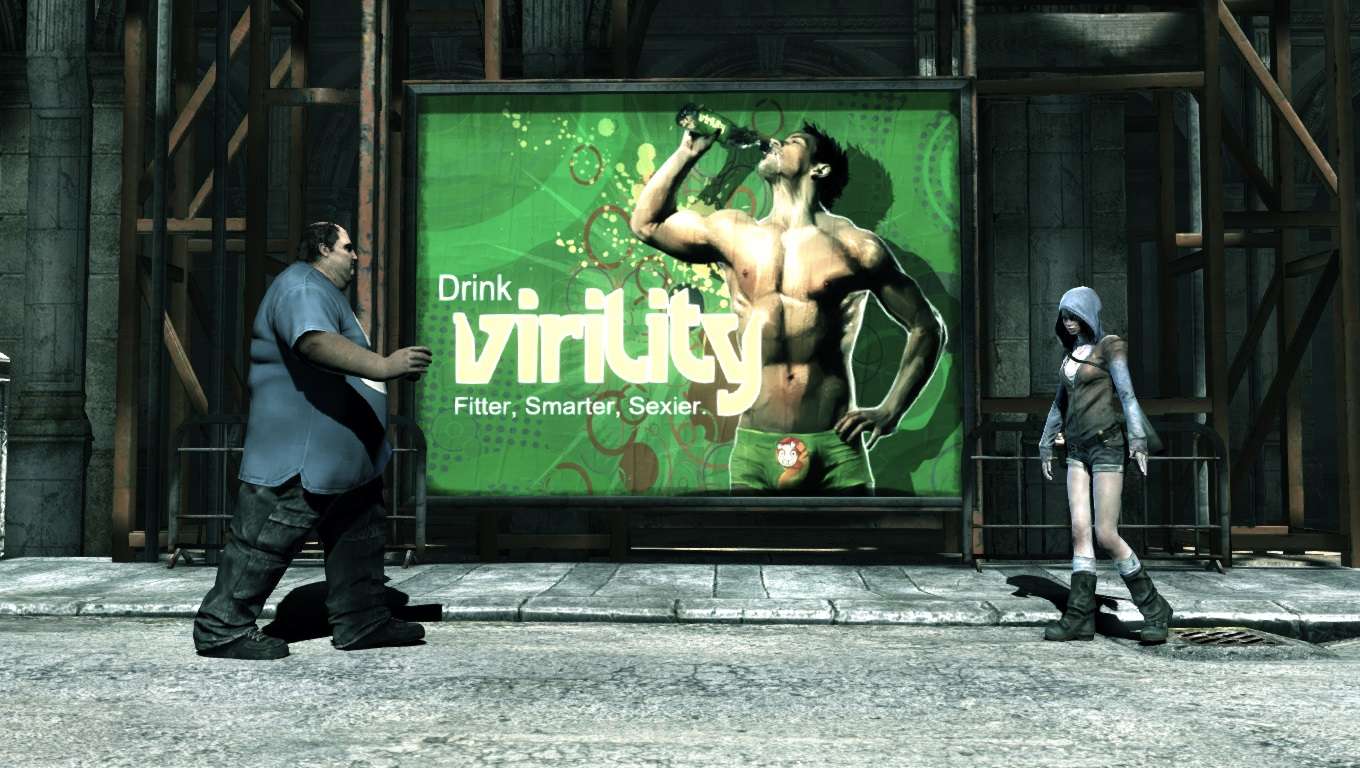 The story of DmC is straightforward. Dante and his brother Vergil are Nephilims, offsprings of an angel and a demon. Mundus, the king of the demon world, captured their demon father, Sparda and killed their angel mother Eva as according to a prophecy only a Nephilim can kill Mundus. Mundus keeps an eye on everyone in the human world with the help of Raptor News and controls human minds with a drink called Virility. Vergil forms an order to take down Mundus and makes Dante a part of his plans. Fast forward, Dante kills Mundus and Vergil reveals his true intentions. He wants to rule the human world, Dante opposes, and the two brothers fight. Dante nearly kills Vergil but stops when Kat asks him to.

I think the story isn’t that bad. And felt quite interesting at many points. Believe it or not, when the game ended, I wanted to know what would happen next. But, I guess this game will never have a sequel. And it’s quite sad as the story is promising, the only fault is that the Ninja Theory tried to use this story to replace the original one. 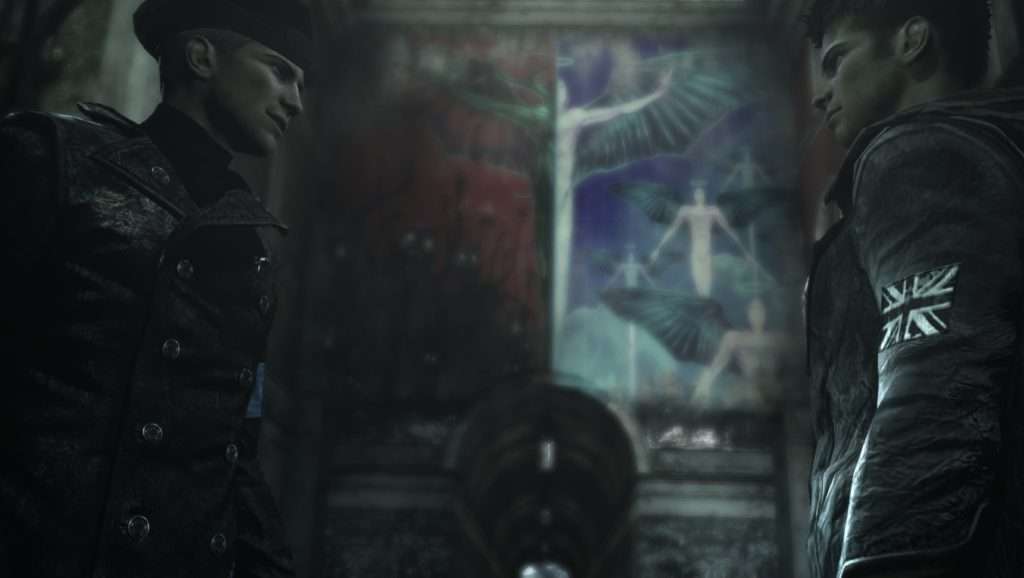 Dante of DmC: Devil May Cry, is entirely different from the original Dante. And no matter how many times I play DmC, I can’t accept the reboot, Dante. I know it’s a subjective thing and if you liked this Dante, there’s nothing wrong with it. But Dante always seemed out of place in DmC, had no character development at all and he had the laziest written dialogues in the game. I know that it’s a reboot and the characters have to differ from the original ones. But you can’t remove everything from a character that is loved and worshipped by the fans.

But not everything was terrible about Dante’s character. When he tried to defend and save Kat from Mundus’ guards is one of my favourite moments in the game. And his calm and casual conversations with Vergil were enjoyable as in the original games they fought more than they talked.

DmC: Devil May Cry and the reboot Dante are gone for good. And every time I think of this game it hurts me because it’s a good game, ruined by its own name.